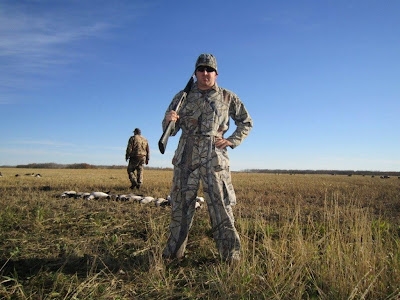 My friend Mark was invited to a waterfowl hunt in Manitoba last week, his first hunt of this kind. It was sponsored by Final Approach, the waterfowler's decoy and blind company, through our friends at Bushnell, the parent company of Final Approach. Mark researched the location, terrain, and expected temperature extremes where he would be hunting, and augmented his existing clothing by purchasing what he thought he needed to complete this mission is relative comfort, if there is such a thing regarding waterfowl hunting. The hunts would take place in fields, rather than in water, so waders weren't needed. His ankle fitted, insulated Irish Setter rubber knee boots worked extremely well, and his Columbia Quad parka was perfect for the job, waterproof with lots of pockets for gear and ammo.

The guide was John Vaca of Final Approach, a former Canadian goose calling champion. John is a giant of a man, passionate about his chosen profession, and a good egg to hunt with. I hunted with John last year in the pristine Oregon elk mountains. He makes killer grilled ribs but made us wait for HOURS until they were done. Worth the wait. 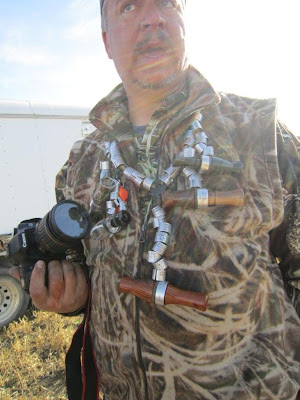 The hunt was a resounding success. Some days they shot 50-75 various ducks, and Canadas and snow geese fell like rain. They make shotshells every day. The FA snow goose decoys fooled the sky rats like nobody's business, and the Eliminator Cargo Blind settled the hunters in for waterproof, windproof comfort. Maybe a bit too comfortable. I've fallen asleep in various models many times. Besides great decoys and blinds, Final Approach offers gun cases, flags, bags and clothing made for the serious waterfowler, made and designed by folks like Big John that use the products hard. 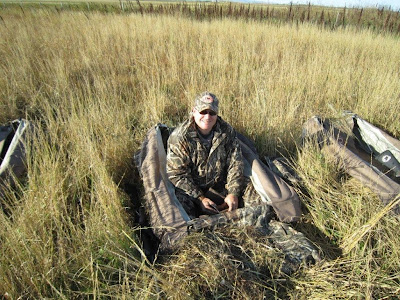 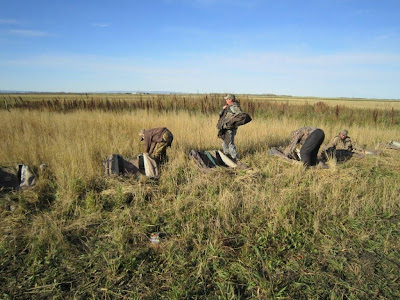 Friends Bill and Tom from Bushnell were also invited. Not only are these two a couple of shooting fools, but they got the opportunity to fish for giant walleyes. From the picture, they succeeded. Any walleye that huge would be on my wall as well as in my belly. Don't forget to save the cheeks! Nice job, guys. 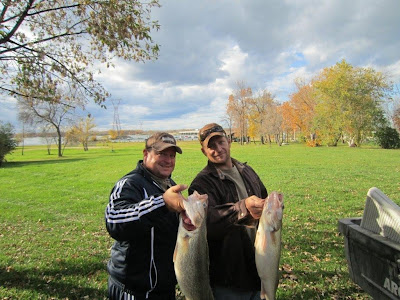 Mark brought me back a nice young snow, and I breasted him and cubed him. I marinaded him in a home made schezuan sauce and toasted some sesame seeds and pine nuts to sprinkle on top of the vegetables and wild rice I made to go with it. The meal was fabulous. Most folks overcook their goose and turn it into liver tasting shoe leather. Resist the temptation! Rare and red is the way to go, as is with most wild game.