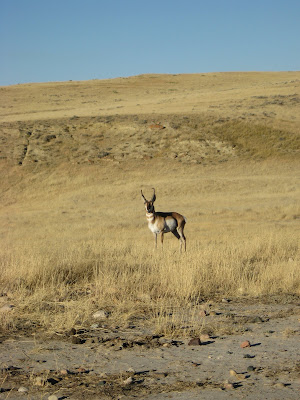 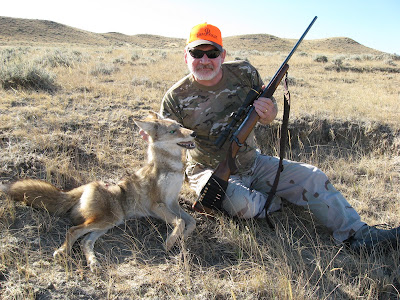 We spotted a really nice antelope and went after him. We stalked for quite a while, and we tried to beat him around a hill. We stopped and sat and I was set up on the tripod, and Jay said not to shoot because he wasn't sure it was the right one. That goat was a three pound trigger pull away from being dead meat at about 150 yards. After he ran, we saw he was the right one, so we had to try again. We had another stalk, but it didn't work out. We had a third chance later, and he ranged at 385 yards. I set up on the hood of the truck on top of my pack, dialed in the CDS dial, and squeezed the trigger. He died, and it was the longest shot I personally have witnessed in the field up until that time. I always dress my own animals, but Jay insisted, and he said to mark my watch, because it should be done in under a minute. He was a bit disappointed because it took him a minute and seven seconds. Probably because he was talking the whole time. Jay is engaging and full of humorous colloquialisms and hunting war stories, having guided around the world for over 28 years. It is an honor to be schooled by such experts, no matter what occupational field it may be in. Thanks again, Jay. 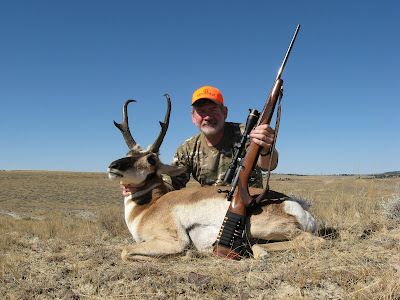 John insisted that I take the first shot this hunt, so it was his turn next. We looked for a while, but it was getting late, and we went into town to drop off quite a few animals from the other hunting parties, and lots of capes for the taxidermist. The taxidermist is in Glenrock, Wyoming, and is one of the best I have ever seen. His name is Stan Taylor from Wildlife Creations International, and he had already done a nice European mount for me a couple of years ago when I was hunting in the area. I highly recommend him. I opted for another nice European mount, since I already have a couple nice antelope shoulder mounts.
We stopped and looked at one of several innovative bowhunting blinds made out of water tanks they have on the ranch, situated close to watering holes. They are half in the ground, and the tops are covered with earth to ease temperature extremes. There's plenty of room to shoot a bow from, and you can expect shots of under 40 yards most of the time. 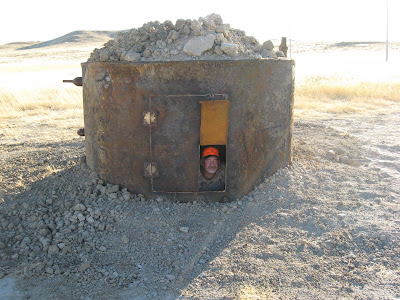 We had great steaks that night, great conversation, and maybe a few too many drinks, but when in Rome…. I also had time that night to remove the inevitable cactus needles from my knuckles and knees I got while taking trophy pictures. Sometimes you have to let them puss up for a week or two to get to them, similar to porcupine quills. Note to hunters…don't forget tweezers.

The next day I could've slept in, but in for a penny, in for a pound, and I wanted to help Jay and John with an extra set of eyes to glass for John's animal. John is an experienced long range shooter and competitor, and after a long stalk on "Grasshopper", a unique antelope with large antlers that flared somewhat forward, we sat and caught our breath. John set up on the tripod at 492 yards. The animal was calm and browsing, never knowing we were there. Just listening to John control his breathing told you he was no novice. His Weatherby Vanguard in .257 Weatherby Magnum barked, and the loads that his dad built up for him with 110 grain Accubonds worked perfectly. At just under 500 yards, John make an absolutely perfect shot and dropped him like a lightning bolt. It is the longest shot I have ever seen in the field. It was truly a testament of skill. Great job, John, great shot. The CDS dial gives you an opportunity to shoot so far away that it should come with a package of salt to sprinkle on your bullet so the meat doesn't spoil by the time you get to it. 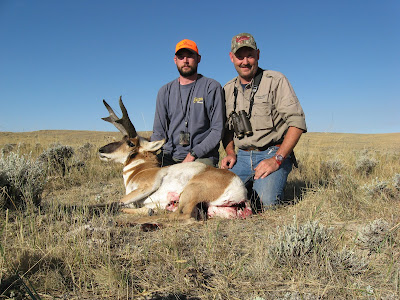 Now we had to drag this goat out. We all took turns, two at a time, resting and switching sides frequently. I think we had to drag him something like just under four billion yards to get to the closest road. I am in similar shape to a pound of warm butter, and the Thursday before I left to hunt I had a series of shots in my spine for another disc problem I've been dealing with. Dragging dead critters is not part of therapy, and if my doctor knew what I was doing he would shoot me. I'm paying for it now, but hope for the best. I don't advocate Old Number Seven and prescription drugs to anyone, but it's worked for me.
I met some great folks there, and have a tentative alligator hunt in Florida next year that I'm already looking forward to and wondering how I'll pay for it. My Howard Leight earplugs worked well to blot out my snoring bunk mate, and I'll try to get the antelope blood out that dripped on my boots. All my equipment worked well, and there were no issues travelling. I was once again honored to take part in a hunt with experienced and professional gun monkeys like myself, and know that I am blessed for the opportunities. I highly recommend an antelope hunt as the first big game hunt for anyone, as well as for folks not as physically able as required for elk or other game. The Leupold CDS dial can buy you some long range skill that you otherwise may not have, but you still must be familiar and comfortable with whatever shooting platform you choose.
Thanks again to John and Jay and everyone from Leupold for this opportunity! 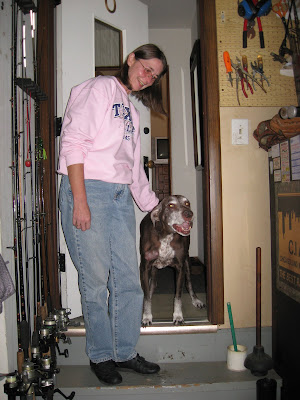 I must say that my favorite part of any hunt, though, is coming home and having My Shirley and Rad meet me at the garage door! Aim hard!