Seven guys from L-3 EOTech were here last Tuesday. A few of us from OP had productive meetings with them most of the day. These were to be our hunting partners for Texas hogs. After work we went to my favorite restaurant in the whole world, the Italian Kitchen, where we feasted like kings until the wee small hours of the morning. John and Emerald really outdid themselves this night above all others. Incredible. I especially enjoyed the buffalo steaks, raspberry chicken, and Australian high jumping rabbit among the dozen or more courses they brought out, and the Kentucky molasses custard was one of the most exquisite desserts I have ever had in my mouth. Too complex and layered with flavors to be described in words. Otherworldly and I felt unworthy. Great job again, thanks.

We arrived outside Winona, Texas after a few hour ride from Dallas International, and were greeted with open arms by world famous predator caller Byron South and his gracious family and dog Sugar. Sugar is a blue lacy, a breed combining a coyote, greyhound, and wolf, and also the state dog of Texas! Lovely dog. Giant slabs of beef were on the spit, the temperature was cool, and we sat and relaxed under the clear Texas sky and ate steaks and spuds to our heart's content while talking hog hunting and varmints, with the hospitality given so often and openly by residents of the Lone Star State. Stereotypes are built on facts, and I've known for a long time that the hospitality that Texans offer so freely is sincere and wide spread. Yee-Haw!
After dinner we drove to the North Star Ranch, where Kyle Nunn and a whole 'nuther passel O'
nice folk showed us to our bunks and spoke about what to expect. My Yankee white bread speech is turning South even in my writing now. The Southern twang rubs off on you. Mom was partial Cherokee from Oklahoma, so I'm not so far removed.
After settling in, we dressed in appropriate garb and gathered guns and gear and packed ourselves into a couple of Kubota RTVs and set off into the darkness. It was hours after dark by this time, and crisp and clear. We saw hogs through the night vision and thermals, but too far away to pursue. We also noticed that through the thermal imaging devices, a bunny at ten yards and a cow at two hundred look surprisingly the same. Until the rabbits start hopping. Cattle don't usually do that. A sure giveaway. Depth perception is extremely difficult through a thermal device, but nothing can hide, that's for sure. We had a couple of failed stalks, didn't work too hard, got to relax and know each other better, and were having muddy fun. It was especially fun watching a few of the guys come in squeegeeing pounds of sticky brown gunk from their clothes and gear after pushing out a buggy that Tom got stuck in a bog from hell. Tom is apparently an excellent driver. 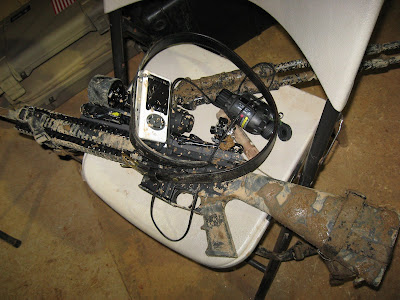 The next morning we got our gear together, and WOW, what gear. Every kind of black gun and caliber was involved. Every option you could think of from every manufacturer was installed. It looked like a catalog of possibilities. Lowers, uppers, stocks, barrels, triggers, foreends, muzzle brakes, all different and built for the specific tastes of these familiar users. Many of our group had military backgrounds, but all were real shooters. No posers. Calibers were 5.56, .308, .30 Remington AR, .450 Bushmaster, and .50 Beowulf. A bunch of us also brought handguns, including 1911s, a Glock 20, H&K Mark 23, and my Freedom Arms .454 Casull. Pistols for around the camp were a Ruger SR9, a S&W M&P, Mark's Walther P-22, and my pink Sig Mosquito. Friend Mark and others ran the big Mark 23 with the new Insight WL1AA weaponlight well. 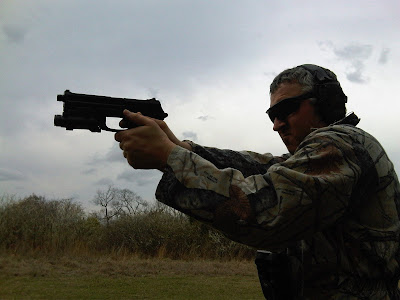 We had one failed opportunity that night. These damn hogs are smart. Trick them once and they learn not to let it happen again. Their sense of smell is comparable to a deer. Hard to get close. Night time is the best time to hunt them because that's when they're the most active. They hole up in the daytime in brush that is absolutely impenetrable. We used the superb Insight Technology WTM (Weapon-Mounted Mini Thermal Monocular) as handhelds, and they were easily and instantly mounted in front of any EOTech HWS, night vision compatible or not. 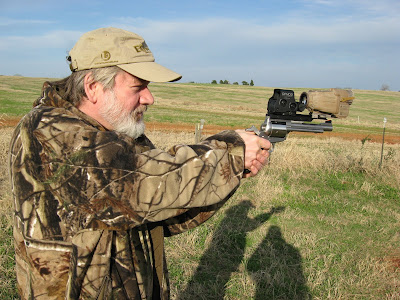 Friday morning I went out with friend Tom to sight in guns. At 100 yards we zeroed my Colt Comp II H-Bar, friend Mark's Barrett Rec-7, Tom's CMMG and his DSA FAL, all with EOTech ESPS3-1 sights in front of equally superb EOTech G-23 magnifiers, and then sighted in my .454 with the new loads I rolled before I left. 35 grains of H110 under a 240 grain Hornady XTP Magnum moving at around 1700 fps, a few hundred fps faster than a healthy .44 mag. I mistakenly said in the top video the handgun sight I used was an EXPS2-1, but it was an EXPS2-0. The ammo I shipped wasn't available, so Byron gave us a case of Remington Premier 62 grain match that he said stays together well. Surprisingly, it did. 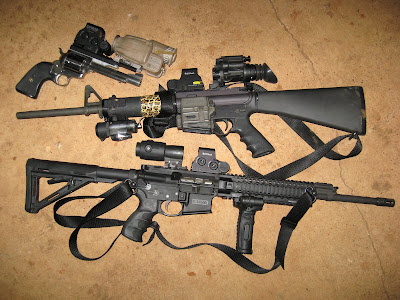 After sighting in we went out with Byron to call dogs. After a few unsuccessful sets, we tried a clearing that looked promising. Byron shrieked and called like a baby stuck in a garage door. Unnerving to say the least, but the dogs responded. I was on my BOGgear sticks when a big coyote ran into the middle of the road and stopped. I drilled him. We sat still. Another dog came out and I drilled him, too. Two shots, two dogs down. Byron is a magician. 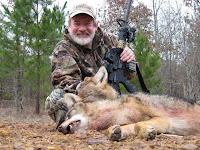 We went back to the nicely appointed North Star lodge to relax. I grabbed a rod and reel and some terminal tackle and shot a line out in one of the tanks (Yankees call them ponds) close by. My white spinner was trying to coax a hit from a bucketmouth, but no luck. I didn't have a lot of time to spend there, and soon it was time to get ready for another evening hunt.
That night we were able to stalk to within a hundred yards of a group. Three of us opened up and dropped two big hogs through L-3 PVS 14s and PVS 18s in back of EOTech night vision compatible sights. I used an EXPS3-1. We saw that one hog wasn't quite finished. We three happened to have handguns. We slung our rifles. Time for the coup de grase. It was perhaps a scene eerily reminiscent to the showdown at the OK Corral with three gunfighters walking slowly to our porcine target, boots crunching muddy gravel, then hands slapping leather and drawing at the same time, muzzles flashing, the blasting staccato booms taking turns, bullets slapping pig flesh, then quiet. I was shooting a Glock 19 with Speer Gold Dot 124 +Ps. On my right was a Glock 20 in 10mm, and on my left was a 1911, a triumvirate of death from the hips. Good pigs smell like maple syrup. I've killed pigs before, but never noticed it until then. I'm not kidding. The best hogs smell exactly like maple syrup. Weird. I really didn't slap leather, though, I slapped a carbon fiber BLACKHAWK! Serpa holster.
Saturday morning I was looking forward to some hard core fishing with a resident habitual bass hunter, but the early storms were hard, and it didn't happen. My biggest bass was only about 6 pounds so far, and they had really big fish there, some over 10 pounds, but alas, not for me this trip.
Saturday night was our last night, and I really wanted to slay a hog with my Casull. No chances so far. As I was getting ready to leave, one of the L-3 guys suggested I put an
Insight Technology CNVD-T (Clip on Night Vision Device-Thermal) on the extended Weaver rail in front of my OPMOD sight. I tried it and it worked. Outrageous. I've never even heard of such an evil collection of hardware. It was very functional. I planned to use the gun without the thermal until dark, then install it in front of the OPMOD sight. Everbody's jaws dropped with the sheer ridiculousness of it all. This is the most expensive modern handgun set up anyone could even dream of. A $25,000 handgun for pigs. Yikes. 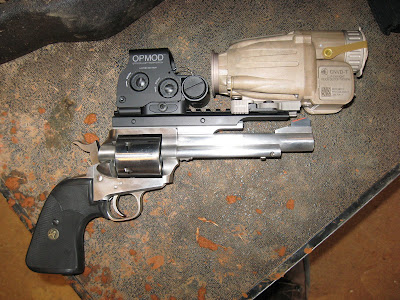 Devin the videographer and I set up in a tripod stand 30-40 yards away from a feeder set to throw corn every hour for a few hours. Just before dark a group of hogs came in. I still had some light and had not yet installed the CNVD-T. I dropped the hammer on the biggest hog. He took off, but I called the shot good, and I threw another shot at another one in the half second it took for the group to haul ass. Hogs are FAST! I heard a hog expire a short distance away, and was reasonably sure I connected with the other one while it was running away. We found the first one, but had no signs of a hit from the second one, so I suppose I missed. Hard running shot to connect with anyway. Nice pig, under 200 pounds, and another non-kosher animal off the earth. I have such a taste for a pulled pork sandwich as I'm writing this…. 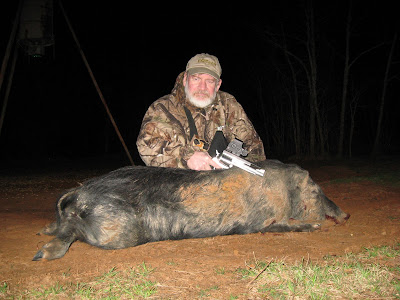 We took some photos and got back to the lodge for congratulations, a couple of beers, and a giant mess of Texas mudbugs. Some of the mudbugs were really spicy, and some were REALLY spicy. Delicious. Not just food but a way of living for some. 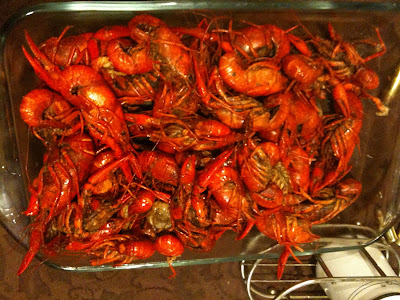 Byron and his family and Kyle and the friendly folks from the North Star Ranch were so accommodating, the food was great, the lodge was clean and comfortable, and everything was as good as could be. We were even able to ship our firearms, so we didn't have to deal with the hassle of carrying gun cases through airports. What a great trip. Thank you all for everything. Great job, and you made us all feel very special. I sure learned a lot from Byron. My thanks to all. 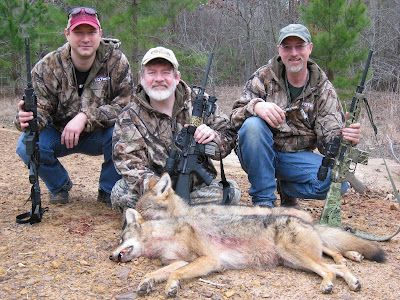 The guys from L-3 were the most fun bunch of gun monkeys I've ever been hunting with. I so enjoyed fondling the guns they put together from components from so many manufacturers, chock full of aftermarket parts suited to their likes and perceived needs. Real professionals, and a couple of the tasks to be accomplished on this trip besides to have fun was to teach and learn about the new night vision and thermal equipment, and this we did intimately. Great job, guys, and I will debrief Technical Sales when I get back. Product familiarity really comes from wringing out products in the field, rather than my office. Thanks for everything, and sharing your knowledge. 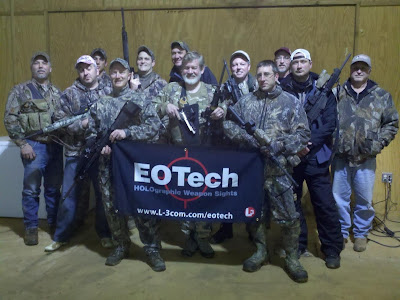 We got through lots of mud and snoring hunters and finally arrived back at the freezing Chicago O'Hare airport for the trip back to OpticsPlanet to pick up my car, then on my way home to see my beloved soulmate Shirley and our boy Rad. This is always the best part of any trip, getting home to where I really belong the most. 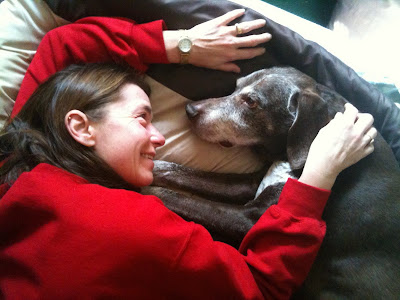 One Response to Texas Pigs and Coyotes with EOTech Sights, Night Vision and Thermal Imaging From L-3, Lots of Hardcore Black Guns, $25,000 OPMOD Revolver, and Mudbugs