>I waited until the last minute, and this is what I get. It was deer season in Illinois two weekends ago and my range was closed because of it, so I had to wait until this last weekend to sight in for my Iowa deer hunt in a few days. I had Saturday set for shooting in case I ran into trouble. Turns out, I did have trouble, and needed to go Sunday, as well.

I had six boxes of 20 gauge Remington Accutips for my new Savage 220F that I’ve been excited about shooting. The hype on these guns is tremendous. I know that every gun is an individual, but this gun is a piece of crap. Absolutely would not feed from the magazine. Absolutely would not eject. I also had one misfire because of a light hit. And to top it all off, it shot poorly, at least with the recommended Accutips. I got one group of three inches, but most were all over the place. I have six slugs left to bring with me if I decide to hunt with this gun as a single shot that does not eject. It’s a light and handy gun to carry around though, and the Accutrigger is excellent. Maybe I’ll shoot a doe with it.

The Winchester SX3 cantilever deer gun I set up for my friend Tom was great. First shot was on paper, and the adjustments were precise on the Nikon Slughunter 3-9×40. No wasted slugs, and Tom was able to group within a few inches immediately. Nice gun.

I also brought along a new pistol I bought, a Sig Mosquito that I’ll use to train folks. You can’t have too many .22s. Although this is one of the bright pink Sig Mosquitos, I’m still reasonably secure in my manhood. The gun ran great with some CCI Mini Mags and is going to be a new favorite for some of the smaller-handed shooters and gals. 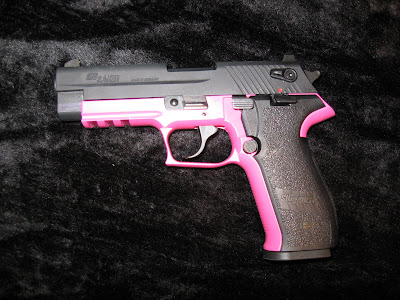 So Saturday night I installed a 3-12×42 Nikon M-223 scope with the BDC reticle on my H&R Ultra Slug gun in Leupold QRW rings, and mounted a 3-9×40 Nikon Omega muzzleloading scope on my T/C Omega .50 caliber smokepole. As long as I was puttering in the gun room, I also mounted another M-223 with the RAT (Rapid Action Turret) turret in the Nikon M-223 mount on top of my Colt Competition II H-Bar. I may need it for coyotes if I fill my deer tags and have time. I cased up an old favorite 22-250 Remington 788 under a discontinued Simmons 6-24×44 SF Prohunter.

The 3-12×42 M-223 may seem like an odd duck for a 12 gauge slug gun, but it is a perfect fit, especially with the use of Nikon’s superb SPOT ON TECHNOLOGY website. This website will tell you the trajectory of anything in any environmental conditions, and even tell you the distances the BDC circles will be set for as long as you input your cartridge specifics. Get the Nikon Spot on Technology iPhone app also. It is the most useful program I have ever seen.

I had quite a few boxes of Lightfield EXP slugs that I use in my Remington 1100, so I brought those to the range, along with two boxes of Hornady SSTs that I wanted to shoot throught the H&R. I stopped at my local gun shop and bought two more. 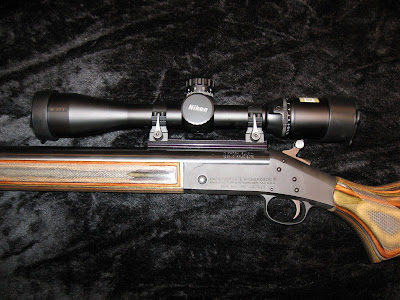 Sunday at the range I started off by sighting in the H&R. First shot, light hit. And again, and again, and again. The primers were hardly touched. Both of my old boxes of SSTs had sunken primers. Would not shoot. The two new boxes I had shot well enough, but now I used them to sight in and needed more ammo. I bought three more boxes of the same lot number when I got home. Hopefully I’ll have some time to check zero before I hunt Friday. The Lightfields would not extract and were blowing primers. I’ve never had a problem with them before, but this gun just didn’t like them. The SST slugs were only grouping around three inches, so that’s what I have to live with. 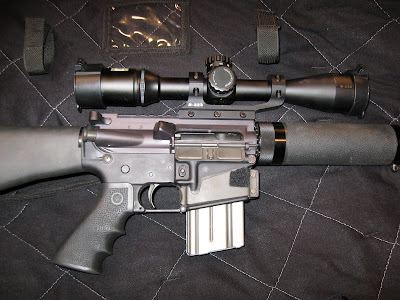 The 788 was perfect and ready to go like always. Three shots in about an inch from a cold barrel, perfectly sighted in like I keep it. 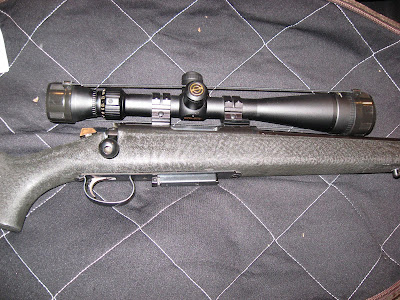 I then tried to sight in my muzzleloader. The first shot was on paper. I was using two 50 grain Triple Seven pellets under a T/C 250 grain ShockWave sabot. I clean between every shot with this gun, and while swabbing the bore my ramrod broke off in my barrel. Disgusted, I went home and watched the Bears kick the Eagles’ ass. 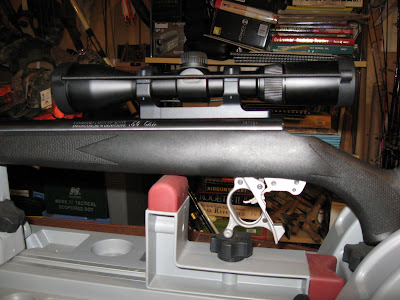 I’m looking forward to this hunt a bunch. Tom’s a great guy and we’ll have fun
in the cold. Also, since we’re driving we can bring critters home. Normally I’m flying around for hunts, and frozen meat as under 50 pound checked on luggage is the only way to get stuff home. I’d really like to refill the game freezer. At the home front, My Shirley and I and Rad had an excellent Thanksgiving, and hope you did, too. Bobby Flay’s leftover turkey sandwich recipe is out of this world. Check it out.
Our old boy Rad fell down the stairs for the first time. Scary. I was coming in from my work at the range, and he follows me everywhere. I went downstairs first and he followed head over heels until he hit the ground. My house is not spotless, and when I picked him up he looked like a used Swiffer cloth. He dusted the stairs of cobwebs and box elder bugs. He howled a bit, but it turned out okay. He’s gonna be 15 soon. German Shorthaired pointers don’t live that long, usually. He’s our best friend. I’ve shot hundreds of birds over him and they don’t get any better as working dogs or guard dogs or best friends.
Enjoy the season!