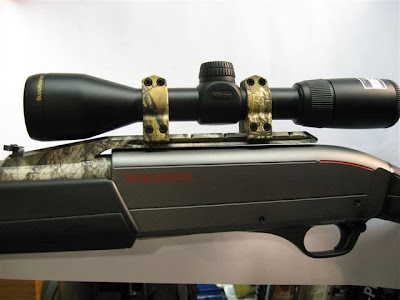 Tom and I are going to Iowa in a couple weeks for big whitetails and I just mounted the scopes on our guns. Tom and I are both using Nikon Slughunter 3-9×40 scopes with the BDC 200 reticles. His is mounted on a new Winchester SX3 with a camo cantilever barrel, and mine is going on my Savage 220F bolt action 20 gauge. The rings I chose for his gun were the medium height Nikon Mossy Oak Break Up rings that matched his camo barrel well enough. The rings are made by Warne, and are great quality, though they are split vertically and are not as easily installed as other types of rings. The medium height worked very well. You can see by the picture that there is just enough clearance everwhere, and just enough room to install the caps that came with the scope.
On my Savage I installed the Leupold #49911 medium extension rings on top of standard one piece bases, the same as I did for my compatriot Ryan a couple of weeks ago. By the way, Ryan doesn’t get too caught up with group sizes, so when I asked him how it shot, he said, “Under three inches.” 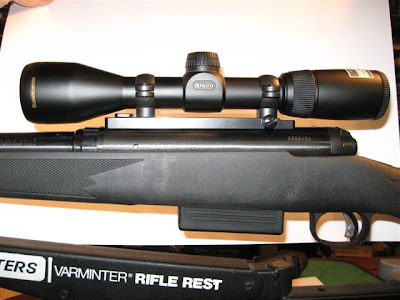 Tom and I will be going out this Saturday to shoot our guns for the first time. I will be more specific with group sizes. We have Sunday if we run into problems, then we leave. We’re driving, so we get to bring critters home if we get lucky.

I have another procedure on my back the day before we leave, so driving instead of flying and dealing with luggage and airports is a Godsend. This is already a really stupid thing I’m doing healthwise and could backfire, but a couple of folks are counting on me to go, the tags have already been received, nobody can take my place, and selfishly, I’ve never killed a really big whitetail. I need one.

Vicodin and whiskey and ice packs notwithstanding, motorcycles need love too, and cold weather riding is easier with good camo hunting clothing. I recently gave my compatriot Al a leather jacket that my dad gave me decades ago. I gave up waiting for it to grow to fit me. Al is one of the biggest people I know, but he’s physically a diminutive creature. The jacket fits him great and now I think of him as a miniature Marlon Brando. “He could’a been a contenda….” 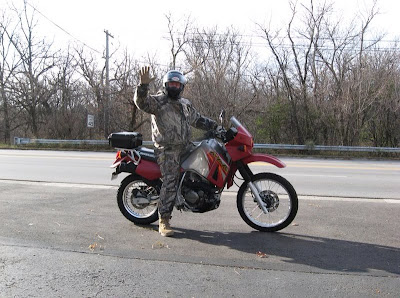 The decaying animal parts in the title refer to a few heads from geese that my friend Mark killed while on his last trip, and I’m fleshing them out to mount for him. I’m also making him a wingbone call from one of the turkeys he killed the time before. And to believe I wanted to be a taxidermist. I’ve mounted a handful of creatures before and I’m glad that it’s pretty much out of my system.
Hope your hunting season is turning out great, and God bless you and yours this Thanksgiving day!