Steven K. Ledin, May 4, 2011
Big show in Pittsburg. The NRA show is consumer-friendly and family oriented, unlike SHOT. About 70,000 folks attended. Quite crowded with kids, wives, and good old Joes without an agenda except to look at and drool over guns. Very little professional work is done here. At SHOT, some booths may be about 75′ x 25′, whereas at NRA the same booth is maybe 20′ x 15′. Some goods are sold here, and the gun monkeys really enjoy that. The largest booth was the NRA retail booth, selling everything NRA you can think of. People generally had a good time, and most companies of size were represented. There were a lot of celebrities, and the place had a strong vein of politics. If you are not a professional and can’t go to SHOT, this is the one to go to. Bunches of guns there, but little new to report. There were a few hundred anti-gun demonstrators in front of the convention center, and I had to walk through them with my BLACKHAWK! lightweight tactical pants and 5.11 shirt , Tactical Trainer boots, Rush 12 pack, and my show badge with my life membership flag, but they were harmless. I may have looked like a walking billboard, but the clothing is very functional. My Rush 12 pack serves as my carry on as well as my bag to carry loot at the shows, and my Maxpedition water bottle is filled from a fountain for the plane rides after I go through security.
I hadn’t been to Pittsburg before, and most cities are very much alike, but I fell in love with Pittsburg even before I landed there. The countryside was stunningly beautiful. Downtown Pittsburg is well laid out and clean, and even in the wee small hours walking around by myself I didn’t feel threatened. It’s easy to get around in, and police are everywhere. The residents are proud of their town and it shows in their demeanor. They are friendly and enjoyable. Not easy to say in most big cities. Pittsburg is on the convergence of the Allegheny and Monongahela rivers that combine to form the mighty Ohio. The rivers are pretty clean. It’s not a steel city anymore, and hasn’t been for many decades. It’s a clean city with good air. The rolling hills are lovely. I really like Pittsburg. The Weston hotel and their employees were superb.
The night I came back I was treated to Obama’s news about Bin Laden. As a former U.S. Navy sailor I couldn’t have been more proud. My friend George snapped this picture for posterity: 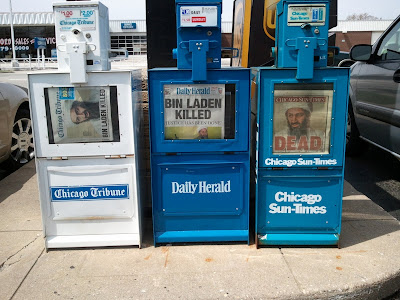 All is well on the home front, except My Shirley has been absolutely kicking my ass in darts lately. I’m not very proud of her.