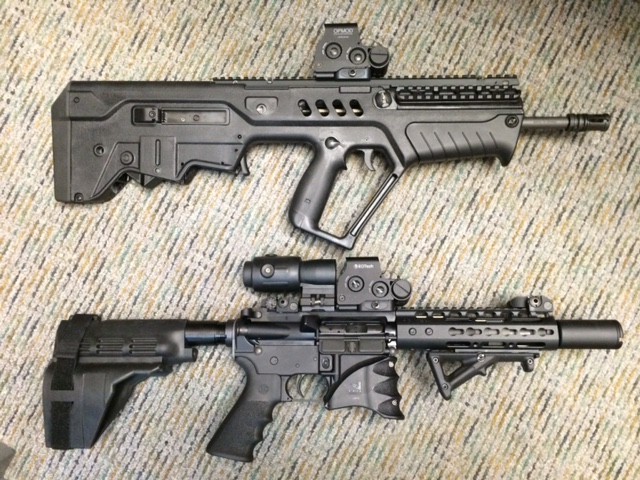 AR-15 type guns are pretty much a commodity, and most are interchangeable.  Sure, you can have different barrel contours, types and lengths, different forends, grips, sights, stocks, and bolt on stuff ad nauseam, but it's still an AR carbine. Those that live in locations that allow SBRs (Short Barreled Rifles) enjoy a pretty different feel to the familiar platform. Chop off a foot of barrel and the gun becomes even more lively and fast. Those that don't live in a state with that legal luxury may still enjoy the feel of an SBR by buying an AR pistol, or at least turning the pistol-registered lower into a pistol that can be shouldered. The SigTac Pistol Stabilizing Brace (SigBrace) lets you use a pistol-length barrel and a pistol buffer tube that accepts the SigBrace. Your arm goes through the SigBrace and is secured by hook and loop to your forearm. You can also use it against your shoulder, instead, effectively treating the gun as an SBR. You'll lose a lot of velocity with a shorter barrel, of course, but depending on your needs, it may not make too much of a difference. Each SigBrace comes with a letter from the BATF stating that it is legal to use on a pistol.

The 7.5" barreled pistol in the above picture is attached to an Anderson Arms pistol receiver. It's as quick and feathery as any AR can be, and it swings like a pencil. The forend is from Noveske, and it has the attachment points du jour, keymod. The owner put on a Magpul AFG2 Angled Foregrip and Troy Micro Tritium M4 front and DOA rear sight set. They're not tall enough to cowitness, but not too short to use alone. I love the sticky feel of the Hogue grip and use it on all of my AR-type guns.

The IWI (Israeli Weapons Industries) Tavor with a full 16" barrel has the same overall length as the 7.5" AR pistol. It was designed as this size, whereas the AR was not designed as a pistol. As with most firearms, when you shrink them they lose a certain amount of reliability. The Tavor was designed as an improvement of the AR platform. The bullpup design isn't new, and is most notably known in recent times in guns such as the Steyr Aug, British L85, and even a Mossberg 12 gauge.

At this time there are a couple of dozen bullpup firearms in existence, from .22LR to 50 BMG. The Tavor is the latest incarnation of this design.

The Tavor was designed by IWI and the IDF (Israeli Defence Forces). These folks have been surrounded by people trying to kill them for thousands of years. They know what they want and need. One of the weak points of the design is the trigger. It simply sucks. Pull the trigger and keep pulling until you realize the safety is on. But it's not. It just requires a pull of a dozen to 15 pounds until it breaks. Fortunately, there are a few manufacturers of triggers already on board with the Tavor design. The trigger that the owner of this Tavor has was made by Geissele, and like all of their products, are considered among the best. Unfortunately, you have to pay for the best, and this one has a retail of $350.00. Street price is not much better. But it works great and turns it into a different gun. The owner also had me install the hottest brake on the market right now, the Lantac Dragon. The Tavor can be made to eject from the left side with a kit, or ordered as a lefty. You can also get a 9mm conversion kit that uses IWI Uzi magazines. Overall it's a full size gun in a tiny package. It feels like a full size gun, too. Much heavier than the AR pistol. But overall, it should be inherently more reliable, and certainly offers a lot more velocity. With an aftermarket trigger, the Tavor is about 2 grand. The AR pistol can be built for less than half of that.

The below picture shows a STAG Arms 3G with an 18" barrel and a brake compared to the Tavor. Quite a difference, indeed.