>Fear and Loathing in Kansas with Turkeys and Bushnell 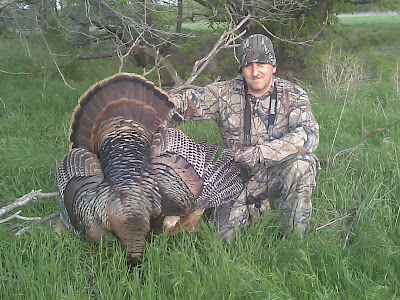 A friend of mine I’ll call Mark the Turkey Hunter was invited to Kansas with Bushnell to shoot turkeys in the face. A few items from OpticsPlanet went with him. For binoculars he used the Bushnell Chuck Adams Bowhunter edition. These small and reasonably priced glasses were the perfect size and weight for turkey hunting, but Mark later opted to use a binocular with much better performance, the superb Elite 10x42s. Bigger and heavier with more magnification, but he seemed to prefer them over the handier Bowhunters. Anything that Bushnell makes and labels, “Elite“, you can rest assured is a top tiered product comparable to anything made in its price range. He said his Gerber Diesel multitool came in handy a couple of times, and his BLACKHAWK! backpack with hydration carried his gear easily. He noticed a lot of various BLACKHAWK! and 5.11 clothing on fellow hunters in and out of the field. Mark was using a Winchester Super X 3 shotgun he likes. Among the reasons he likes it is because it has the Winchester “W” under the pistol grip, and upside down it looks like an “M” (for Mark). He also likes the gun because it swatted a 22 pound gobbler with an 11 inch beard and giant spurs at just under 50 yards without optical sights, and another one a bit closer. Not bad shooting. I guess I’ll mount the tails and beards for him, and I think he wants the skulls, also.

On the work side of things, busy as ever. The four Riflescope 101 classes last week had the highest attendance overall since training began a few years ago, with 64 people attending, most of them newer employees. I’m in my comfort zone anytime there’s a bunch of guns laid out in front of me. Seems like home.

I reverse engineered a couple of returned spotting scopes the other day, kind of the same way manufacturers do, except instead of using appropriately sized tools, I used a big honkin’ brick. Easy-peasy. Remember, kids, always use safety glasses when reverse engineering products with blunt objects. I should’ve worn gloves, too, because some shrapnel introduced itself to my throttle hand. I fixed this issue by covering my palm with duct tape and keeping the throttle on the old Sportster wide open as much as possible on the way home.

Our flower gardens are doing well, and even Rad lends a hand. Well, maybe not a hand, but when he pees in certain places, plants don’t grow, so we know where to put the stepping stones and garden gnomes so they don’t get overrun with foliage. Food garden gets planted soon. Some tomatoes are already started and getting good sun on the kitchen table. My job is to maintain the power tools and spray for dandelions, which I did last week. I was proud of myself until I realized that I sprayed with grass killer instead of weed killer. Now my grass has burn spots the size of moon craters. I only have a green thumb when I hit it with a hammer and it turns color.

Had a few chuckars in the yard last week, and they looked pretty happy. I left them that way.

BLACKHAWK! sent a Twin-Turbo entry ram for us to use for a display we’re making. A couple of us used it against a dumpster. Holy crap, this 41.5 pound behemoth would crush a head like a grape. I didn’t find any handy doors around I could get away with destroying for a reasonable test of the ram’s capabilities.

Been using a Vortex Solo RT 8×36 monocular a bit lately. Nice product. Vortex is doing a heck of a good job with their tactical products. One of my favorite companies to deal with. Good people with plenty of expertise in the optics field, and they keep surprising us all with their innovative products. Watch them!

Mother’s day next week, don’t forget! Mom could always use another Vortex Viper PST riflescope or maybe a Propper Boonie hat for working in the garden.