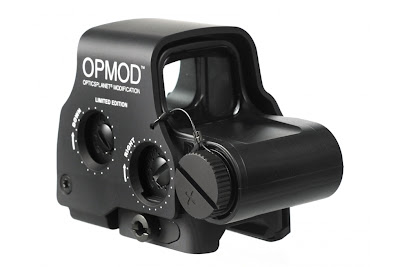 The OPMOD EXPS2-2 and EXPS2-0 EOTechs are selling like crazy. These OpticsPlanet exclusive products’ notoriety has taken off due to chat on popular gun forums and industry word of mouth. We are actively working on more OPMOD products, as well as a variety of exclusives.
It’s been busy here, like normal. Just like poker, I’m all in. My projects are so numerous they seem like schools of salmon swimming upstream against a raging current. Occasionally a bear grabs one. Lately one of the projects is assembling a 1/6 scale Harley for a display. Too many parts!
One of our guys just taught an AR-15 class here and over 70 people attended. Great class. People unfamiliar with firearms just eat this stuff up. It starts at youth. Put a small boy in an empty room with two coat hangers and he’ll come out with one shaped into a car, and the other like a gun. Most adults have cars, but don’t realize they can have guns, too.
My friend Daryl came in from the kingdom of Norway last week with his wife and new baby, Magnus. We had good conversations about his life there. He said the Norwegian army is kind of for show. There’s so much coast line that if they were ever invaded they all should meet in Oslo with their Krag Jorgensens and put their backs together. We were also able to shoot a match set up in his honor at our local shop after hours. I shot my Krebs Custom 1911 and kicked everyone’s butt. First stage used a GSG-22 with a red dot sight at 20 yards. Second stage was your choice of centerfire pistol with a reload at about 15 yards, and the third stage was a CZ Cadet at 21 feet strong and weak hand. Fun course, and my thanks to Jim and the guys for organizing the shoot.

My Shirley and I splurged on a new dart board. We play serious darts every night. She kicks my butt sometimes. She’s a wicked good player. We got a Winmau Blade III board, the best I know of, and we’ve had several great boards over the years. We also get to chat about our day when we play. A lot of couples don’t get that face time. I recommend it highly. Sometimes, though, I wonder if I’m being taken seriously in my Spiderman boxer shorts.

HAWKS WIN!!!!! Chicago Blackhawks superstars Bobby Hull and Stan Makita and others used to show up at a local meat market called “Bartucci’s” when I was growing up. The last time they won the cup was 1961, the year I was born. This is the start of a dynasty. Chicago went absolutely nuts.

Keep in touch with your guns.