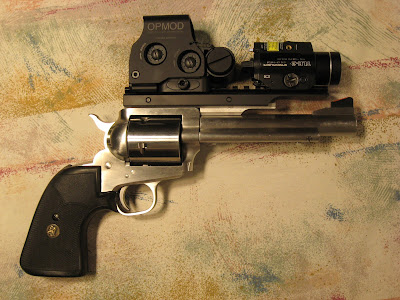 About 25 years ago I finally had some money saved that needed to be spent on my gun addiction. A friend's dad had just bought a 6" Freedom Arms revolver and it was too much for him. He wanted to sell it. Like so many other items I lust over, this manufacturer's products were way out of my league, pushing two grand retail even way back then when their guns only came one way. There were no Premier models and Field models, they were simply the best they could make. To this day, Freedom Arms makes the finest revolvers on the planet. They must be felt and manipulated to physically realize the micrometer tolerances and bank-vault like solid lock-up, not to mention actually shooting the monster .454 Casull cartridge. And out of a single action six inch non-ported revolver the recoil was horrendous. Much more so than the modern higher performing cartridges like the awesome .50 S&W and .460 S&W out of 4.5 pound guns with long barrels and muzzle brakes, which, besides the muzzle blast, make them a lot easier and less scary to shoot.

Rick's dad only wanted $800 bucks for it, and I was ready to hand it over. Until My Shirley said that a relative needed money. Crap. So there went my dream. I gave out the loan and pretty much said goodbye to the money and the gun. A few weeks later and EUREKA!! The relative paid me back! Hallelujah! I bought the gun the next day. It came with two boxes of Freedom Arms ammo with three rounds out of each. At that time it was the most powerful revolver in existence, only now overshadowed by very few new cartridges.
I was so proud of owning such a jewelry-like superb piece of equipment. It was mine! I learned to shoot it. I reloaded for it. I never quite got over my fear of it. There are very few people I would ever let shoot this obnoxious beast.
I took it on my first safari to South Africa. I got the "under the table" load from the Freedom Arms gunsmith, which was basically a case full of Hodgdon H110 (31 grains) and a 300 grain Hornady XTP crammed in and crimped hard. CCI 400 primers. There's a lot of giant critters on the dark continent.
Disclaimer: Don't try this at home. I am not responsible for your death or injuries. I'm looking at some of these loads now and I'm kind of afraid of them.
I loaded 100 of them and shot them over a period of a couple weeks. I soon changed the beautiful rosewood grips for the larger and more recoil reducing Pachmayrs and started using a padded shooting glove. This is the only gun to this day that I really had to use a glove with. This iron hurt. A lot. The muzzle violently torqued back to your head so fast. Superman's wrist cannot hold this thing down. Very intimidating, especially with these ridiculous loads. Lovely and precisely crafted loads, though. One at a time with a Rock Chucker. I loaded another 100 and shot them, then another 100 and by then it was time to hunt. I took 50 with me. I got pretty good with this beast. My maximum self-imposed range with my chosen 2x scope in the SSK 3 ring mount was 80 yards, and I could center a pie plate every time with confidence.
I'm looking at some of these loads right now, expecting them to go off like a long lost land mine in Korea.
Anyway, the first day in the bush I had an opportunity to shoot an exceptional impala. He was far, but in range. The lorrie (South African for truck) stopped in a ball of dust. I was ready and had the gun well rested against the fender while I breathed easy and squeezed the trigger. BOOM!! The animal took off. And didn't stop. My Zulu tracker, my guide and I looked for blood or hair and found none. I had never missed a big game animal before, and if I would have called my shot I would have said nearly perfect, but I must've missed. The animal showed no signs of injury, I just had to have missed. I wrote it down as a flinch, or nerves or something, but I had to have missed for the first time. Oh, well, glad to get it finally out of the way. Now I could concentrate on actually having success.
We saw the area where the animal went, and followed. We saw him again hours later. I had another opportunity. I am well aware that shooting is a head game, and I was not new at it. He was again at about 80 yards. I rested against the spare tire and conciously squeezed, oh so pretty. BLAAM! The thing took off again. No sign of injury and no blood or hair. JEEZ!!! What the #@%&*! I missed again? How could this be?
I saw the same animal later that evening and shot him at a couple hundred yards with my rifle. He is on my wall in my game room. Nice big impala. But I really wanted to shoot him with my Casull.
The next day I was prone on a sand dune, perfectly rested, and took another shot with the revolver at a springbock, a small deer. I freaking missed. I looked at the scope and saw that the crosshairs were turned inside the scope. I hadn't noticed it earlier. I went to our impromptu range and shot the gun. We eventually saw the bullets landing 10 feet low and 10 feet right. No wonder we didn't see a miss, the slugs were just too far away!
It was still my fault, though, kind of. I knew my Leupold scopes would take any recoil punishment all day, but I use Leupolds on most of my important guns, and I just wanted to use something different for a change. I chose wrong. Live and learn. Experiences like this are why I am sometimes more than opinionated.
My .454 has been on hunts with me since, but without spilling blood. This time it's for pigs in Texas. May be a good opportinity.
On this hunt I am dictated to use L-3 products, so this is an opportunity to use an outstanding OPMOD EOTech EXPS2-0 on a hunt for the first time. Far out. I thought I would just slap it on my existing SSK mount, but the mount is so far out of spec for a standard weaver style, and not anywhere even close to a picatinny, or MIL-STD 1913 rail. Nobody makes a Freedom Arms MIL-STD 1913 spec rail, and I needed such a product because the EOTechs, particulary with QR mounts, are made to fit picatinny rails. It wouldn't even come close to fitting on my SSK. 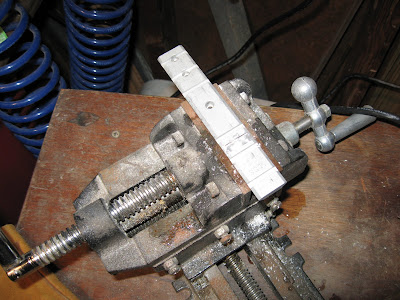 I started thinking, then whittling on my expensive SSK mount. I sanded off the top about 1/8" with a belt sander like a shade tree mechanic, then started to change the angle of the sides. I was able to eventually make it accept one of the very nice Weaver flat top riser rails, after cutting two .206 (pic spec) recoil grooves into the SSK mount. I was more comfortable installing the OPMOD on the harder and more uniform Weaver mount than the softer aluminum of the SSK. The OPMOD has a grabbing surface that isn't very big, and it's not made to withstand recoil of this magnitude. The whole package went together perfectly, and completed with the OPMOD and a Streamlight TLR2 is just another example of a gun monkey gone mad. And I got to use power tools. 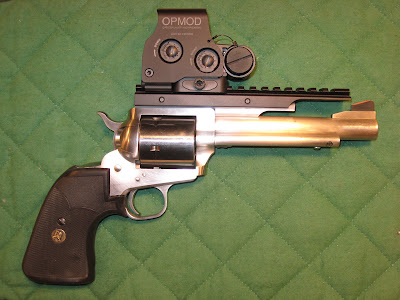 I shot the gun with healthy loads at 50 feet without the light and laser. What a hoot. Good times. If you are comfortable with yummy dangerous explosions at wrist's ends, this is for you.