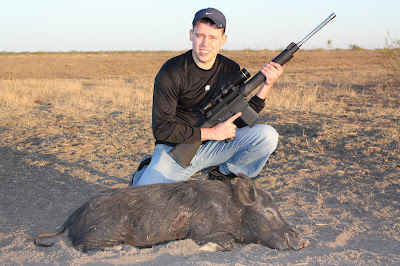 Just got back from Texas pig hunting, had two days of work and then out to hunt them again. Texas this time, also, but just a few miles from the Mexican border instead of mid-state. Crystal City, Texas, the spinach capital of the world. The city gives a nice homage to Popeye. Weather was a lot warmer, around 80 degrees some days, as low as 50 some nights. Almost no bugs, and breezy and pleasant.

The hunt this time was sponsored by the famous laser company Crimson Trace, and with me were my Team Leader Mark from Technical Sales, Tony from Purchasing, and Kelly from Marketing Services. Mark is a shooter but hasn't had a hunting license for decades. Tony and Kelly hadn't hunted or shot a gun before.

The ADL7 Lodge is opulent with mounted animals from around the world. Not like the dinky ones in my house, but really enormous examples. Some of the animals were approaching world records. The lodge slept two to a room with separate showers and toilets for each, and the beds and pillows were the nicest I can remember sleeping on for a long time. The rooms had no windows, so the place was black as night should be, and it was pretty soundproof. This related into some of the best Zs I can remember. If it wasn't for the clock, you wouldn't know if it was night or day, and since most of the hunting was done at night, that was certainly a question when you woke. The lodge was immaculate and spacious, with gracious hosts Adam and Dusty and posse friendly and likable. The large bar area was well used, but the pool tables were not used well. We all kind of sucked at billiards. The food was excellent, including the breakfasts.

I saw more exotic game at the ranch than I've seen in several trips to the dark continent. For a price you can hunt them, but we were there for pigs.

The pickup beds were mounted with tall metal crow's nests that sat two hunters, and another two that could stand. From this vantage point you could see for miles in some directions. The base of this crow's nest was about 10 feet high, so your head was maybe 16 feet above the ground. A great view, and as far as I know, nobody got seasick. 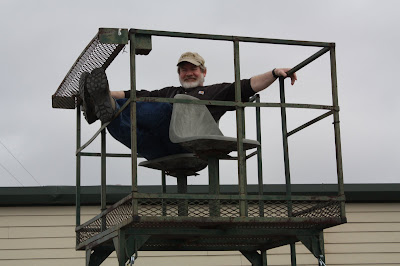 Iian Harrison, the winner of the first "Top Shot" TV show is a good egg and now the Public Relations manager for Crimson Trace, and he was nice enough to take our three guys to the rifle range on the grounds for some rudimentary safety and shooting instruction. From what I hear, he did a great job, and the guys were pretty comfortable with the firearms when he was finished. I was on another project at the time. Thanks, Iian. 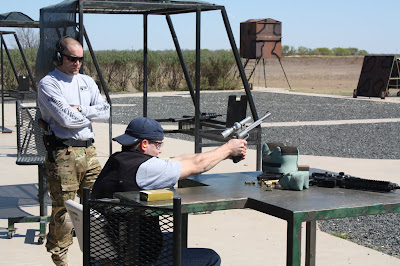 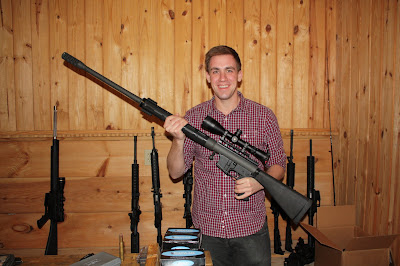 My first time to shoot came the next night, when we spotted hogs in the road a couple hundred yards ahead of us. We stalked and got to about a hundred yards. Everything is different in the dark. I glommed onto a Sako A7 in .270 WSM with one of the new Leupold VX-R 3-9×50 riflescopes that I knew was sighted in. Nice gun. Light enough for me to carry all day, and put together well. I sat in the scrub, ignoring the ubiquitous cactus needles and other pokey things piercing my knees and rump, and adjusted the illuminated point in the reticle to as low as it would go. When our guide Scott shone his spotlight's red beam on the pig I squeezed the trigger and it dropped. The giant hog was maybe big enough for a large hoagie roll. Hard to tell how big the buggers are in the dark with no other pigs around. I tossed the maybe 50 pound pig in the back of the truck and off we went on further adventures.

Some folks missed shots through the next few days, some folks combined for kills. There were some good one shot kills, including Iian with his single shot BMG taking off half a hog's head at about 200 yards. Wish I would've seen that one.

There were lots of cool guns provided by Crimson Trace to choose from, and Tony grabbed a DPMS heavy .308 and slayed a couple pigs nicely during our few days there. His last chance came the early morning before we left. He had a chance at the last pig we saw, and as excited as he was, calmed himself after a short stalk, knelt, sat, and then went prone and blasted a 168 grain Sierra through his boiler room. Nice shot, and the pig went down in its tracks. It couldn't have been done better. Now we have a bloodthirsty pig killing machine in our purchasing department, and Kelly slayed his share, also. My God, we've created monsters. Bwahahaha!
One night by myself I thought I heard some hogs. My ears were straining to find out from where. They were coming closer. I heard them grunting, coming fast! Then two Mexican eagles (Cara caras) flew by and the grunting noise was coming from them. When pigs fly. 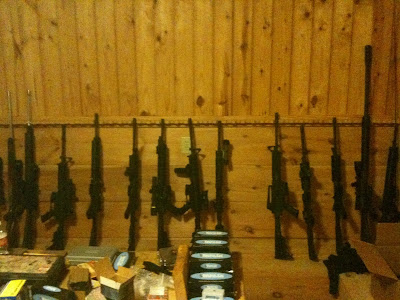 I shot my second pig with an AR type DPMS in .308 with another 3-9 x50 Leupold VX-R. I shot him quickly several times, the guide noting impact and calling him down, but the hog got up and kept going. These swine can be bullet traps, with the hard and thick gristle plates sucking up a lot of lead. I was using my new favorite flashlight, the amazing Insight Technology HX150 (soon to be available at OP), and if it wasn't for the superb long lasting performance of this incredible flashlight with programmable brightness, my guide Oscar may not have been able to track the pig the last hundred yards or so, finding just the tiniest spots of blood. When Oscar spotted him he was facing us on all fours, and the fight was not yet out of him. When he was being dressed, we dug out a couple of pieces of bullet jackets close to the surface. The bullets just spun apart. The 168 Sierra Match Kings are not the best projectiles to be used for this application, for sure, but that's all we had besides ball.

One night I was dropped off in a metal blind next to a pond. I was about 125 yards away from a feeder that dropped corn every hour. I've never been so comfortable on a folding chair. The blind was above ground maybe 6 feet, and the inside was carpeted and about 5 feet square and plenty tall enough to stand in. There was a window on each side about 3×1 feet that quietly folded down, leaving you plenty of room to shoot out of, easily able to cover 360 degrees. It was about 4:30 in the afternoon, and sunset wasn't for hours yet. I read a book, drank some water, took off my boots, took off my shirt, and considered taking a lot more off, but didn't, as far as I will tell you. Lots of whitetails, gazelles, and other common African plains game animals got into bow range if I wanted them that way. But I was after pigs with a rifle.
Just as all light was gone the hogs came. I set the VX-Rs illuminated reticle dot as low as it would go, which was just perfect. Just a pinprick of light. I was using a Remington 700 in .300 Winchester that night, and I took the shot. The pig bolted. I didn't hear the bullet slap, so I waited a while then went to look for blood. None. I looked further. Nope. And further. Nope. It's hard to shoot in the dark, but I didn't think the shot was that hard. I kept looking. A bit farther and a bit farther, until I lost my bearings and didn't know where I was. What a jackass. I got turned around in the middle of a high fence hunting area. Typical. Leave it to Stever. There was an oil well lit up in the surface, but being as painfully dense as I often am, I didn't realize what direction it was when I left the blind. About a half hour after losing the feeder, blind, and any sense of direction I decided to just turn my light off and conserve my batteries and wait and listen for the pickup to come get me. I kind of kept walking anyway, and saw a telephone pole. Followed it to a road and found my way back. I am so inept at this I couldn't believe how far off course I was. Call me Magellan. All good, and good fun, but never saw a sign of a hit. I did take a jackrabbit later that night with that .300 at a good couple hundred yard poke. His left rear foot is stewing in formaldehyde and borax as we speak. Lucky for one of us. 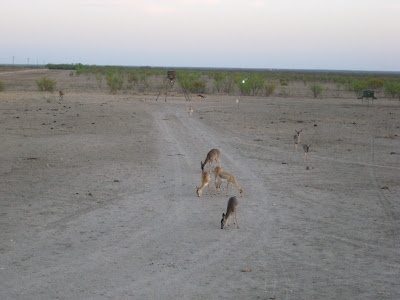 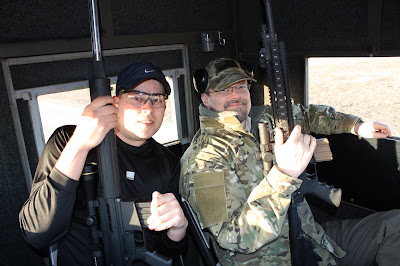 CEO Lew and the rest of the great folks from Crimson Trace were fabulous hosts of our hunt, and we used their quality lasers on handguns and long guns. We even used some infrared lasers developed for the military, and we viewed these otherwise invisible beams with night vision that Crimson Trace purchased from OpticsPlanet. And I had my own fourth generation ATN NVM-14 with me also, of course. 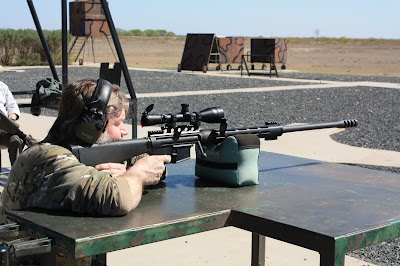 The ADL7 Ranch is a high class facility that I recommend to everyone. The plethora of game abounds, and it's a great place for photographing exotic animals as well as hunting them. I didn't see any snakes, but they're there, too. It really is a place to forget about work and enjoy the company of fellow hunters. Bring a wife and/or girlfriend and play in the bush!

My thanks to everyone involved, it was great fun, and I once again learned a lot, but now our Purchasing and Vendor Services offices have an aura of porcine death. 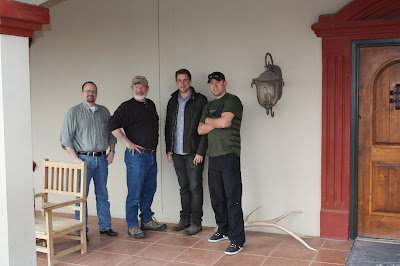