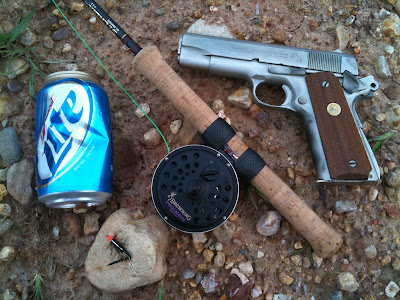 ATK is an aerospace, defense, security, and sporting goods company, and the parent company of Federal ammo, BLACKHAWK!, Eagle Industries, CCI, Speer, Gunslick, Outers, Shooters Ridge, Champion Target, Weaver mounts and optics, Alliant powder, Estate cartridges, and others.
Opening evening was entertaining, with a tailgate party with all participants, probably numbering over 200. OpticsPlanet was the only company represented that was not a firearms dealer. Most of the attendees were the owners of gun stores from around the country. The average age of the invited people were about the same as me, which is pretty old for most of these type of events. Normally gun shop employees are invited to events, and that makes the median age a lot younger. This time is was for the owners. The countryside is beautiful, and so was the weather. The Hyatt Regency Hill County Resort hotel was fabulous. Armadillo races were something new to me.
The first morning we split up into two groups. One group went to the range and the other attended classes in the hotel. I went shooting.
The range chosen was the National Shooting Complex in San Antonio, one of the largest and most respected venues in the world. Over 671 acres. 45 skeet fields, 47 trap fields, 5 sporting clays courses, 2 five stand courses, 75 position rifle range, and 75 position pistol range. Quite the sprawling complex. They throw over 5.5 million targets a year.
Weather was a windy 90 with strong sun. Lots of water and sunscreen were the order of the day. There were 28 range officers introduced to us, then the great Tom Knapp put on a show for us. Tom Knapp is one of the greatest exhibition shooters that has ever lived, and 40 years into it he is better than ever. His trick shots and gregarious bubbling personality must be seen to be appreciated. He was a lot of fun and left most folks just shaking their heads in disbelief. Tom was even able to hook and slice thrown golf balls at will, as well as driving them straight. Unbelievable. He hawked Federal ammo and Champion shooting products, CZ guns, whom he shoots for now, EasyHit fiber optic sights, and Carlson choke tubes. He also used a Quiet Gun choke tube about three feet long, and it effectively lessens noise levels with subsonic ammunition to that of an airgun. Great for use around population centers while hunting.
Then range time. The first station I was assigned to was the rifle range. We lined up a few at a time behind whichever guns we wanted to shoot. I made a beeline for the Sako TRG in .338 Lapua first. On top was a Weaver tactical 3-15×50 mildot scope in Weaver tactical rings. The TRG had a pic adapter so this could be accomplished. The gun did not have a brake on it, but was a real pussycat, and the trigger was superb.
I then lined up behind a DPMS Panther in .338 Federal. A Weaver Super Slam 3-15×50 was on it in Weaver Four Hole Skeleton rings. Nice cartridge for this platform. It’s basically a .308 with a .33 bullet. 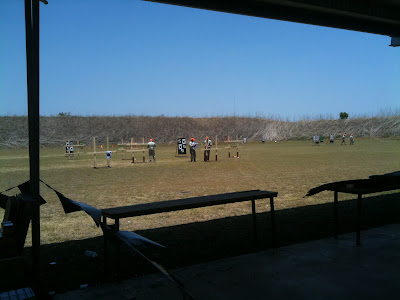 A couple of bolt guns were next. A Ruger 77 Mk II in .300 Winchester nestled in a BLACKHAWK! Comp stock under a 2-10×50 Super Slam, and a Howa 1500, also in .300, under a Weaver 4-20×50 Tactical squeezed into a BLACKHAWK! Axiom stock. I’m not one that prefers pistol grip stocks like the Axiom on my bolt guns, but the recoil reduction from both types of stocks is simply amazing. I shoot a .300 Winchester a lot out of a Sub MOA Weatherby I own, and the difference in punishment was shocking. These stocks really work. Watch out for eye relief, though, because the stock comes back into your face more that fixed stock guns. The springs and components used to lessen recoil are in the stock and come at the price of a springy feel upon recoil, and the stocks collapsing a bit, essentially lessening length of pull upon firing. there were also a variety of black guns like some Magpul S&Ws, and an M1A scout with open sights fed with new Federal American Eagle 168 grain Open Tip Match made specifically for M1A pressures. Nice comfortable load. Shot great.

I shot the TRG a lot, and the last time I went up my first shot was 6″ high, then 8″ high, then not on the paper. Something was horribly wrong. The rear ring was barely hanging on, and the front was also loose. I didn’t bring my Leatherman tool with me and they didn’t have a torque wrench, so I set out to find someone with a multitool, which wasn’t hard. Hated to scratch the screws up, but that’s what needed to be done. I sighted the gun back in, which was fine for me because I got to shoot more. One of the differences in rings, directly related to price, is how hard the metal and fastening systems are. Normally if you pay for Leupold Mk 4 rings or Badger, or Warne, or others that cost a ton, you’ll find that they are worth every penny. Aluminum and lesser quality steel have to be watched closely, and occasionally tightened. Invest in a torque wrench.
We shot some 5 stand next, and I used a Beretta 390 and a 686 Silver Pigeon. I shot well. 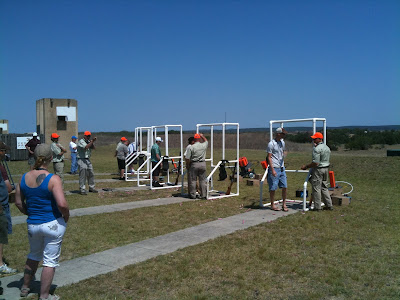 Next was chum Kevin teaching about some BLACKHAWK! holsters, then we went to the pistol range where we shot the hell out of everything. Lots of Champion targets were represented. We shot some S&W M&Ps in compact, full size, 9s and 40s. We shot some Taurus Judges, some S&W 632 Carry Comps in .327 Federal, and 1911 style pistols with Federal Gold Dot and the new Guard Dog ammo. Lots of good fun.
Next was the rimfire range where tiny little targets were picked apart with a large variety of 10-22s with Butler Creek barrels and stocks, black guns in 22, bolts in .17 HMR, and ammo was plentiful. My thanks to ATK for this wonderful adventure!
Next thing you know we were walking our sunburned butts back to the bus for the drive to the hotel for a bus tour of the Alamo and the San Antonio riverwalk. A couple of us were able to commandeer a car, so we went out by ourselves to grab a good meal. We would’ve went touring, but got stuck in construction traffic for quite a while, and didn’t feel like it after that.
The next day I spent in the classrooms. Alliant powder, BLACKHAWK!, Champion, Weaver, RCBS, and the list went on. Can’t say I learned anything, but I always have hope.
Casino night rounded out the event. Nice food and company, lots of beverages and dozens of card tables. I’m not a gambler, at least at cards, so I just enjoyed the drinks.
ATK was nice enough to delay my plane trip home for a few days since I had an uncle that I hadn’t seen for a decade. I rented a car (American car [Chevy HHR]), spent some time at the Alamo and the riverwalk, drove to Austin (wonderful city) to see the son of a friend I work with, got a cheap hotel and the next day drove to John’s place where I was made to feel quite at home by him and his lovely wife, Lee. 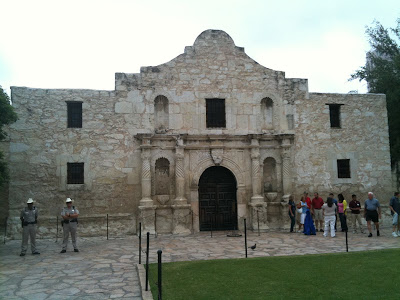 Uncle John is a retired Air Force Colonel, and a wealthy entrepreneur. I think if you end up like him you win, with lots of love and stuff. He is an amazing guy with cars. Has his own freaking ventilated and heated paint booth. Does all the aesthetic and mechanical work himself. Putting motors from a late model one brand into early model whatever he wants. Crazy Cherokee. John has too many cars and too many guns, and I know just the guy to take some off his hands. I did estimate a few dozen guns for him, and I’ll put them on paper and get it to him shortly so he knows what he has. I’m jonesing for his HS Precision Pro series PHL in .300 WSM. It would be the finest rifle I own, and at 5.75 pounds I would take it everywhere. His classic car junk yard must have dozens of early Pony cars, Camaros, Chevy IIs, Corvettes, and others beyond belief. A beautiful straight GTO waiting for someone to build her, and the list goes on and on. While walking his boneyard I was positioned to take pictures and I apparently positioned myself on an ant nest. I saw them covering my right foot like a black sock, but I thought that fire ants were only red. I was wrong. I still have bites all over my foot, and I figure about three per square inch. Much fun and tingly! Live and learn. His completed cars include a lineup of sexy Corvettes from the 60s to the present, and his third Factory Five Cobra. 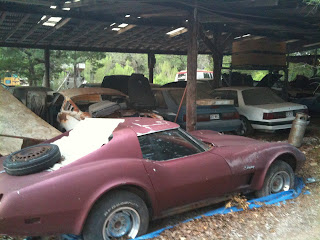 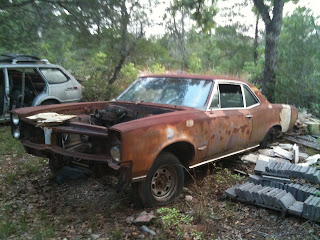 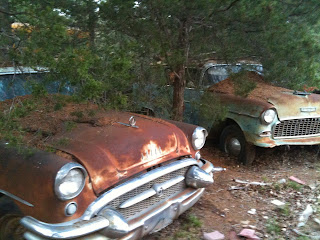 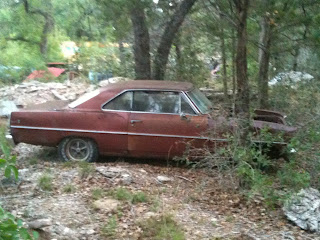 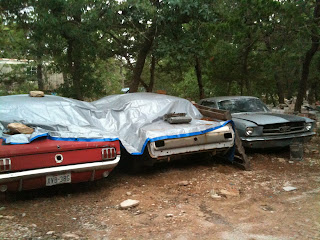 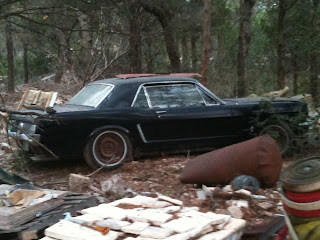 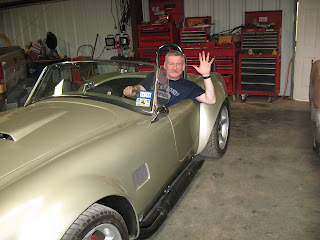 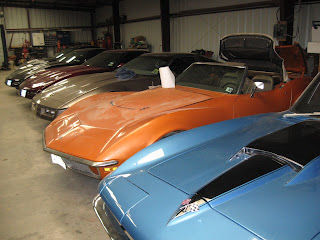 I wanted to try to catch one of his blue or channel cats from his tank (they’re not called ponds in Texas) on my 4 weight St. Croix fly rod with Browning reel, but only managed to catch a minnow. Probably lucky, because these farm raised fish are from 15 to 20 pounds. I figured I’ve been making a fool out of myself for most of my life, why stop now. I carried a Colt Combat Commander while fishing because I could. My CCW license from Nevada counts in Texas. 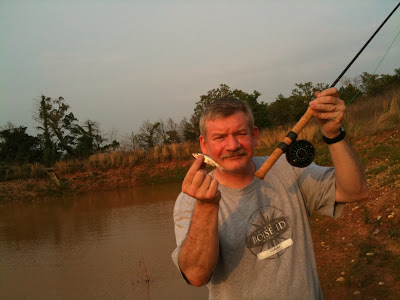 All said and done, another great trip and I am more blessed for having done it! Be well, enjoy the Memorial day weekend, and don’t forget the fallen that have helped us make this great country with their ultimate sacrifices! 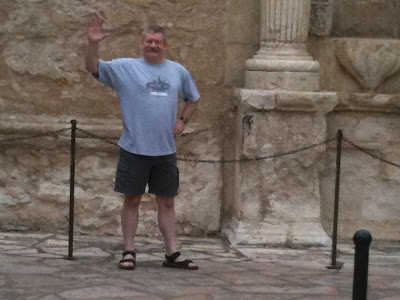 I’ll be working on another mannequin project in the garage 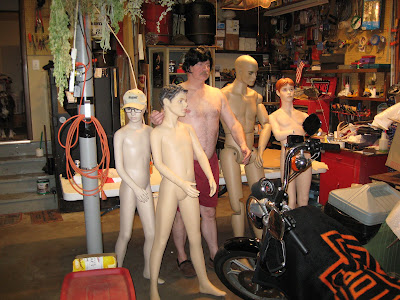