It takes all kinds of people to make a world, including dorks. I’m not proud to say that I still have plenty of points left on my dork card. I didn’t research my Alaska hunt well enough to realize that there will be a film crew there to film an episode for an EOTech-sponsored TV show, and that they would like me to use their products. Not a problem, really, they are superb optics, except I don’t have anything that will accept the G23 magnifier that I could shoot without losing an eye due to the short two inch eye relief available with these products. Most of my deer and bear-capable guns are in larger calibers, and I like my eyes where they’re at. So here I am with a week to go and without a gun that I would feel comfortable with. Unfortunately, that means that my HS Precision and Leupold VX-6 will go unused this time. 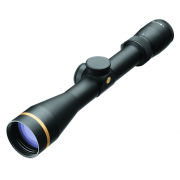 So I ordered up a Remington R-25 in .308. I’ve used the guns before on jackrabbits and hogs, and the gun will be almost perfect for this application. My favorite shop, GAT GUNS in Dundee, Illinois has one coming in for me in a day or two along with an extra 4 round magazine and 5 boxes of Federal Premium 180 grain Nosler Partitions. I’ve killed dozens of critters with Partitions and they’ve never failed me. The gun had better like them. The rifle is camo with a flattop and long tube. A bit heavy for my tastes, and doesn’t have the option of a railed forend, but I’ll deal with that later. I like a mounted light, so when I get it I’ll jury-rig something on it somewhere.

I’ll be able to slap my tan OPMOD EXPS III holographic weapon sight on it, and the eye relief with the flip to side G-23 magnifier is fine with a .308, especially a 9 pound gun fully accessorized. Together the sight and the magnifier make up our OPMOD MPO II sight, which is the night vision compatible version, unlike the OPMOD MPO III, which is not. 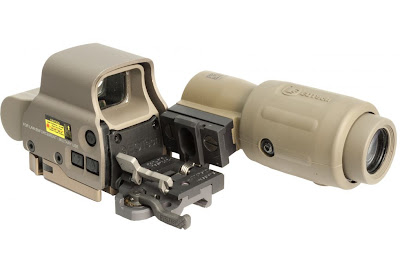 I’ll have Saturday and Sunday to shoot, and if possible, I’ll ship the gun and my sleeping bag and some other gear to Ketchican next Monday. Travelling with a full backpack, a rolling duffel, a Storm 3300 gun case and a duffel bag with boots and a sleeping bag is a pain in the ass, and coming back with checked on meat and animal parts is much worse. It’s part of the whole hunting experience, though.
I have an old down-filled mummy sleeping bag which I’m not looking forward to sleeping in, but it will save me a couple hundred bucks. I did have to spend a bit on new boots, though, and after realizing the temperatures won’t be as cold as I thought (add more points to my dork card), I exchanged my Muck Boot Polar Extremes for the new Irish Setter ExoFlex’s with 1000 grams of insulation. My local store was out of the 800 gram weight, and it’s not that big of a deal anyway. I’ll get my money out of them during a lot of hunts in the future. They are SO easy to walk in with the ExoFlex technology you can’t believe it. My old rubber boots are coming apart after many years of use.
I’ll start packing soon. I’m missing My Shirley and our boy already.